I have kind of been on a Ghost Town kick for the past couple of weeks.  It all started when I was just surfing the web and I came across an incredibly interesting story about a Ghost Town on the west side of Utah Lake.  I love living in an area where I think that I know everything about its history, only to find out that there is some cool abandoned town just a few miles away (if you go as the crow flies.  Since I had to drive around Utah Lake, it is more like 30).
In 1909 Joseph Simpson, R. E. Morrison, and J. E. Davis purchased a 6,880-acre tract of land from the Utah State Land Board for $2.50 per acre.  Their idea was to develop an agricultural community on the western side of Lake Utah.  Much of the land on the western side of the lake is fertile, however it was never settled since there are no rivers on that side of the lake.  Morrison, Simpson, and Davis came up with the perfect name for the community: Mosida (which combined the first two letters of each of their last names).
During late 1909 through 1911 the area was cultivated in order to support the peach orchards which were envisioned for the area.  Irrigation ditches were dug and a pump house was built which would pump water to the area.  By 1912, 8,000 acres of land had been plowed, 50,000 fruit trees planted, 50,000 bushels of grain harvested (the Provo Herald wrote that "the great sagebrush place has been transformed into orchards and grain."), and a 25-room luxury hotel was constructed.  The hotel was one of the crowning points of the company to lure potential people to Mosida, and it was supposedly one of the best establishments between Salt Lake City and Los Angeles.  Another luxury enjoyed was a ferry which shipped people between Mosida and Provo, which additionally served as a place for dance parties. The Mosida Fruit Lands Company soon added more houses, a store, a post office, and even a school. They imported two French cooks to provide their workers the best of meals at the boarding house.  By 1913 some 400 people had moved to Mosida and were working the farms and orchards.  Here are some pictures of the community: 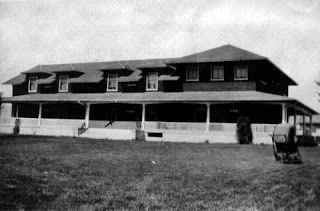 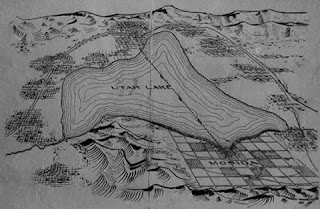 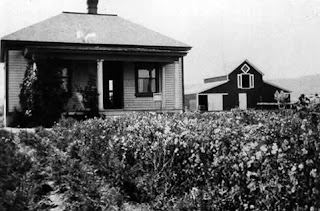 Photo courtesy of waterhistory.org
However, the whole endeavor quickly turned sour.  The fruit trees began to die as the soil was too salty.  Although some crops, such as grain, did do well in the area, grasshoppers ate them all.  In late 1913 the ferry burnt and transportation to and from the city became extremely difficult.  Pumping the water turned out to be more difficult, especially with the fluctuating levels of Lake Utah.  In 1915, the levels dropped so low that water could no longer be pumped.  The Mosida Fruit Company fell further and further into debt and people slowly left the city.  There were ideas to revive agriculture with sugar beets, but transportation to a market was difficult, especially in winter when the lake froze over.  By 1920 the population had fallen to 67 and by 1924 the town was officially deserted.
All that is left of the town are a few foundations (such as the foundation of the hotel) and the remains of some other buildings.  Here are some pictures from 1984: 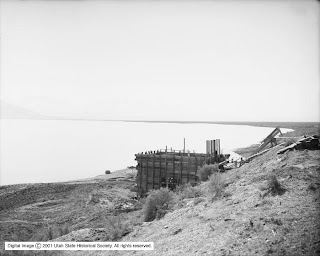 Photo courtesy of waterhistory.org
I went yesterday to take these photos.  I didn't really know where Mosida was located and I just thought that it was somewhere right off Highway 68.  I drove to about mile marker 15 (I later came to find out that the town is located around mile 12) and asked a man if he could direct me towards the town.  He was very antagonistic and wouldn't tell me at all where it was located.  He said that he was subleasing the property and that he didn't want people to bother it.  He said that he could see the property from where we were, but refused to give any hints as to its location.
Unfortunately, the community is not located right on Highway 68 but somewhere closer to the lake.  All the land is private and there are "No Trespassing" signs everywhere!  I wasn't able to find the town and I don't know what shape it is in.  I did find the GPS coordinates (40°07′38″N 111°57′24″W) on Wikipedia if anyone wants to go looking.  Also if you'd like to read more on Mosida, read this Wikipedia article or this amazing history from waterhistory.org.
While researching Mosida, I did find a really interesting website about a development project going on in Mosida called Mosida Orchards.  There are plans to build a develop a huge community on the west side of the lake right at where the old endeavor failed.  At first I thought that it was just a nice idea, but if you click on the button to find out the property that is available for sale, most of the property has been sold.  I guess that it is going to happen.  I think that this endeavor will definitely be more successful than in the past.  However, I just hope that if it does go through, it wont lead to a bridge going across the lake.  Here is a picture of the area that is planned for development: 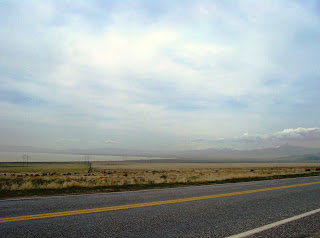