Continuing with the trip in Fairfield, there is a really cool school building in the town.  Here are a couple of photos of the school, although I don't have a date on either one: 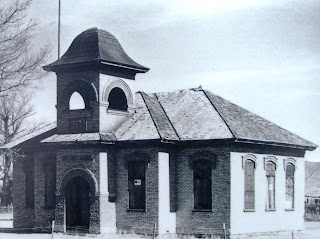 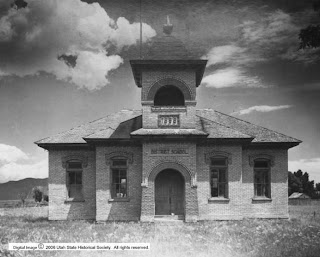 Used by permission, Utah State Historical Society, all rights reserved.
The plaque in front of the building reads: "The Fairfield District School was built in 1898, replacing Fairfield's original adobe school built in 1870.  Richard C. Watson, the school's architect, also designed the Peteetneet School in Payson, Maeser School, and the Knight Block Building in Provo.
"Ethel Warnick Mecham, who taught at the school in 1925, recalled there were about 20 children attending classes.  'The kids loved stories and singing songs,' she said.  'At recess they played Rounders and the boys liked to wrestle.'"
"The school was forced to close in 1939 despite the efforts of Fairfield parents, students and teachers to keep it open.  Restoration of the schoolhouse was completed in 2005.
"Today, the schoolhouse plays an important part in the educational mission of Camp Floyd/Stagecoach Inn State Park and Museum.  It is used for social gatherings, educational programs and local meetings."
The National Register of Historic Places marker adds additional information.  It reads: "This one-room, Victorian Eclectic style school... [was built by] Andrew Fjeld, a brick and stone mason from Lehi.  In addition to serving as the town's only school, the building was used for church and civic meetings as well.  A small brick addition was built on the rear in 1935 to provide restrooms and a furnace room.  The school was closed in 1937 after the decision was made to bus Fairfield school children to the neighboring town of Cedar Fort."
The restoration process was done quite well and the building appears much like it did in the older photographs: 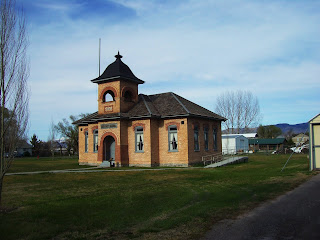 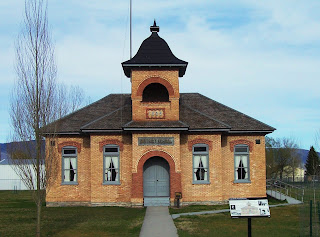